MILDESIGN2015 jury has met on 17 January 2014, as planned, and determined the award winning projects of the competition.

As already indicated previously, the results of the competition shall be announced on 2 February 2005 via, www.fnssmildesign.com/en Web Site and FNSS Social Media channels. The monetary awards shall be deposited into the bank accounts of the winners as soon as possible after the announcement.

We believe that the winners of MILDESIGN2015, which has attracted intensive attention and participation as of the date of its announcement, must not only be introduced before our company but in front of all Defense Industry stakeholders in IDEF’15, which is one of the most prestigious Defense Industry exhibitions of the world.
As FNSS, our aim is to exhibit all winning projects of the exhibition in a platform, where all prominent persons and establishment of the sector shall meet. Thus the MILDESIGN2015 awards ceremony, which is planned to be held on 31 January 2015 has been postponed to 6 May 2015 as to be held in IDEF’15 International Defense Industry Exhibition in Istanbul. The award winning competitors shall be introduced during this ceremony and the certificates and the award figurines shall be presented to the winners.
The invitation and details of the award ceremony shall be sent to the addresses of all competitors in April. 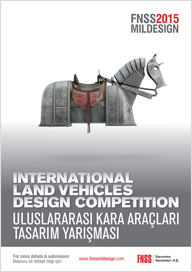